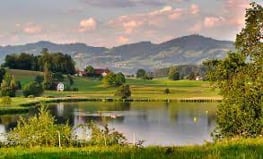 The history of Rye in the Overholt family starts all the way back to the late 1600’s.  My family was invited from the Zurich Oberland (rolling, picturesque Swiss highlands) to help bring life back to the Palatinate around Heidelberg. The Palatinate is a region that was a part of the Holy Roman Empire. This trek occurred shortly after the end of the 30-Years-War and inconveniently in the midst of a minor ice age!  The invitation was based on our skills of farming in the high Alpine Valleys of the fertile Zurich Oberland, and our renowned skills in animal husbandry. 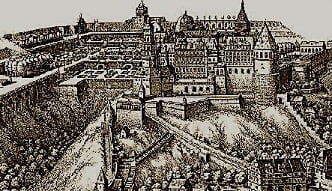 The Palatinate of Heidelberg circa 17th Century

We banded together at an existing large farm, or ‘Hof’. Immelhauser Hof was founded about 850 AD near Sinsheim. These new arrivals began to farm grain and grapes. Hmmm, what can one create with grapes and grain?

Being that this was a minor ice age, we had difficulties farming both crops.  Also, a new cultivar, the potato, was introduced to Europe at about this time.

As it turns out, our much-admired Alpine skills, both in crop rotation and animal husbandry came in handy in our new cold landscape.

We quickly learned that the only way to save grape harvests from shortened seasons and continual frost that caused underperforming sugar accumulation was to distill the grape juice into Brandy. You know, that spirit that keeps you warm in well, a minor ice age!

The families also learned, by observation, that our livestock really, really liked the root-end of the potato plant. Wasting nothing, we quickly learned that it was perfect for distilling as a spirit and we thereby created schnapps. More warmth in the cold, cold years of the 17th Century.

After surviving the latest minor ice age, and then the concluding wars of the 17th Century, my family finally decided to move away – far away to a peaceful sylvan area: Penn’s Sylvania.

We floated down the Rhine to Rotterdam.   Spent a year ‘camping’ at Greenwich, London while negotiating our purchase of land in Pennsylvania which would become the ‘Pequea’ settlement and Lancaster County.

We took our farming and husbandry skills with us and shortly after our landing in Philadelphia, September, 23, 1710, we settled in the wild forest, began farming, and by 1750 we had 4 rather large still properties going full blast.  By 1795, we had eleven stills going.  These last seven had been acquired by purchases and they were distributed to the children of Martin Kindleman Oberholzer.

19th century engraving of a still house in a whiskey distillery

A Pause, and then an Explosion of Production

Shortly after the turn of the 19th Century (that is, the beginning of it), this part of the family became a little more attuned to our religious roots and chose to actually exit the distilling business.

It was just at this time that my line of the family which had by then moved to Bucks County, had begun to enter the distilling business.  Working together as a unit, we began to make our own branches’ form of Rye Whiskey.

Then, in a reaction to the increasing cost of land, the continuation of the Pennsylvania Test Act, higher property taxes, and also harsh feelings extended to Mennonites who did not actively participate in the War of Independence ‘on the front line’ so to speak, our family began to split and go different ways.

One part of the family, led by young Abraham Isaac Overholt, trekked to Ontario Canada, settling at ‘the Thirty’ creating a settlement 30 miles from Niagara River.   And the other part of the family led by Henry Kolb Overholt, trekked to the frontier town of Mt Pleasant – also called ‘Helltown’ – for that was the last place at the frontier where you could ‘Raise Hell’.

A Speakeasy in the The Roaring Twenties

My Family’s Rye was one of the premier beverages for just about 200 years.  General Ulysses S. Grant, President Abraham Lincoln, Wyatt Earp and ‘Doc’ Holiday drank it nearly exclusively.   In fact, the success of American Rye may have actually led to its downfall through repeated Temperance actions that finally reached their goal of stopping spirits sales with Prohibition.

From that moment, January 1, 1920, until the early part of this century, Rye has been at risk of falling off the table so to speak, supplanted by the ‘White’ beverages and Bourbon.

Fortunately, a revival we have all seen is underway and Rye is growing again.

We have now launched our Rye, and our Bourbon, to once again attain a respected place in your personal bar and your choice of beverage in a public venue.

We believe that you will enjoy our Rye, and Bourbon, for all occasions and that you will return to Helltown for the high style taste, the extraordinary taste profile and  the wholeheartedly modern interpretation of an ancient American Heritage.