Seems like an unlikely pairing, but liquor and a higher calling is not just a slug o’ wine with eucharist. Many great alcohol beverages find their origin in religion, from great liquors (Benedictine, brandies) to wines (Champagnes Dom Perignon, Dom Ruinart) to famous beers (Orval and Chimay Trappist brews) and of course, sublime whiskies!

Whiskey, you say? How can that be? Irish and Scottish whiskies originated from monks in the 12th Century. It was considered medicinal, in all the best ways. You know, like Geritol, but fancy. This was a superb source of income for the monasteries, and papal coffers filled up quite nicely, thanks to the popularity of the Scotch and Irish whiskies and French champagnes.

The first US whiskey producers were Mennonites from Europe who migrated to the USA. The Mennonites are members of certain Christian groups belonging to the church communities of Anabaptist denominations named after Roman Catholic, then converted Anabaptist priest Menno Simons. There it is again: priests and libation.

So, next time you’re tippling a glass of HELLTOWN WHISKEY, remember it is a drink…from HEAVEN. 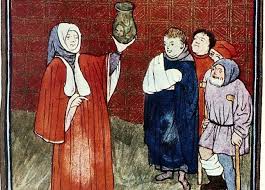